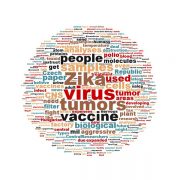 All people working in the biological field are aware of importance of refrigeration of biological samples as plasma, urine, blood, etc. Rapid destruction of proteins, nucleic acids and metabolites observed at room temperature lead to incorrect and misleading results, sometime even impossibility to analyze a sample. What if there is a technology which can preserve important molecules like proteins in samples in such way that they can be just placed on a filter paper and sent to a laboratory for analysis?

Researchers at Washington University are developing a method which can remove a need for a cold chain in processing of biosamples. If proven as reliable and robust, it can not only decrease expenses of analyses but it can also contribute to improved access to such analyses of people in remote geographical areas. A notable effect is also a better standardization of the biosamples storage and thus improvement of reliability of subsequent analyses. Researchers “used a nanoporous material to essentially shrink wrap protein biomarkers in blood and urine samples by growing crystals around the molecules. Then, they transferred the shrink-wrapped molecules onto standard lab filter paper. Once dry, the paper can be shipped at any temperature to a lab for testing.”

Central Europe is involved in expansion plans of vaccine companies: A new vaccine plant in Czech Republic and an expanded Hungarian vaccine facility

Through the deal to buy Nanotherapeutics in the Czech Republic (72 mil EU deal), Serum Institute of India will get a former Baxter flu vaccine factory in the Czech Republic. This plant has an ambition to become the largest injectable polio vaccine factory by capacity in the coming years. The investment to get the plant up and running is planned up to 40 mil EUR. Injectable inactivated polio vaccines are according to WHO recommended to be used for vaccination against polio.

GSK is expanding with its vaccines sales and it needs to expand also manufacturing of the vaccines and its components. The Hungarian factory in Gödöllö will be enlarged by the 40 mil GBP investment. The production of diphtheria toxoid and tetanus toxoid will be moved from GSK’s Marburg production site in Germany.

Zika virus can be in future used to fight brain tumors

It is hard to believe that it can be something good on Zika virus in humans. Zika virus infect predominantly neural stem cells and is therefore more harmful to developing fetus than to adult humans. Scientists in Brazil wanted to figure out whether the virus also attack tumor stem cells in the central nervous system (CNS). And they succeeded. By focusing on embryonal CNS tumors, which are very aggressive and which are manifesting shortly after birth or up to adolescence, they showed on tumor cell lines and in cells-induced mice tumors that small amounts of Zika virus is able to infect these cells and in parallel, destroy cells and the cell-induced tumors. The mechanism behind cells and tumors destruction is apparently oncolysis.

In addition, human adult neural cells were neither infected by Zika virus not destroyed at the dose used. Research also suggest that other tumors of CNS like glioblastoma can be also feasible targets for Zika virus-related destruction.

There are of course still more questions than answers but what if such kind of approach can work? This is not of course a first example of an oncolytic virus use for cancer treatment (see e.g the very recent up to $1 Billion deal of Janssen). It might be that the Zika virus research will instruct people how to fight one of the most aggressive tumor types- tumors of CNS.

Plasminogen system belongs to important systems in human organism, above all it removes protein aggregates, especially fibrin clots. If it does not work properly, one can get thrombosis and this can be a life-threatening state. On the other side, as many other molecules in human body, plasminogen is involved in different pathological processes, just to name tumor cells dissemination, neurodegeneration and various inflammatory disorders. Slovak and Austrian scientists found that the human glycoprotein from human milk- lactoferrin- can inhibit plasminogen activation by direct binding to it. Lactoferrin was able to inhibit tumor cells invasion. In addition to that, lactoferrin also inhibited plasminogen activation by a microorganism species Borellia.

Dr. Vladimir Leksa, the scientist at the Molecular Immunology Unit of HAI, CePII, MUW, Vienna, Austria and at the Slovak Academy of Sciences (SAS), Bratislava, Slovakia: “Lactoferrin is a long time known as an immunomodulatory molecule with antimicrobial and antitumor activities. Thus, to use lactoferrin for treatment is not a new concept. It is a milk protein, which makes it biologically safe for such type of studies. Its function as a plasminogen activation inhibitor revealed by us was so far not known and may explain many of its biological activities. According to our data, it targets cell-associated plasminogen activation resulting in inhibition of cell migration, including tumor cell and bacteria invasion. We are planning further mouse experiments to support and explore further the findings”.