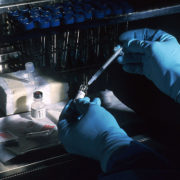 The IMPRESS Phase III trial NCT01072981 has been to assess an overall survival after treatment with a regimen of adjuvant therapy (Gemcitabine alone or with 5-FU chemoradiation) with or without HyperAcute®-Pancreas (Algenpantucel-L) immunotherapy in  patients with surgically resected pancreatic cancer. The study started in 2010.

An opposite of what was expected has happened as announced in May 2016 by NewLink Genetics. The median survival was 30.4 months and 27.3 months for the control and study groups, respectively.

The way how cancer cell antigens are introduced within the HyperAcute® platform to an immune system looks very elegant. Algenpantucel-L consists of 2 pancreatic cancer cell lines (HAPa-1 and HAPa-2) that have been modified to express α-gal. After destroying of infused cells by hyperacute reaction the antigens present on these cells are processed by patient´s immune cells. Because cancer-specific antigens within Algenpantucel-L are shared by cancer cells in the patient, patient cancer cells are believed to be targeted by the immune system. The Phase II showed an improved survival in patients who raised antibodies against mesothelin, carcinoembryonic antigen and α-gal.

As mentioned in the report, it was expressed an opinion that by using allogeneic cancer cell lines one cannot introduce patient-specific antigens if such antigens exist and are of importance. However, Phase II clinical trial data had been very encouraging, particularly for patients who demonstrated humoral immunologic responses. So, it seemed that this approach had worked despite the cell lines possess “generic” and not patient-specific antigens and despite other cell line antigens, not so much defined and identified, have been also introduced to the immune system of a patient without knowing their exact effect.

Algenpantucel-L has had an ambition to become the first product with an FDA approval for the adjuvant treatment of patients with surgically resected pancreatic cancer.

Another Phase III trial, PILLAR (NCT01836432) starting in 2013 should assess an effect of Algenpantucel-L in combination with chemotherapy. The Phase II (NCT02405585) trial which started in 2015 and which should continue until 2020, combines a neoadjuvant chemotherapy followed by stereotactic body radiation therapy (SBRT) with Algenpantucel-L in borderline resectable pancreatic cancer patients.

In light of the negative IMPRESS Phase III results, the company will focus on other promising opportunities in their pipeline, which by other words can mean considerations of future of the HyperAcute® platform. It will be very interesting to see results and analysis from the study, especially an immune response and correlations with an overall survival, if the company is willing to share them. Knowledge from this failed trial can add a puzzle piece to a general understanding of immunotherapy and its applicability for patients.

NewLinks Genetics has had several other candidates among the most advanced vaccines in development in the scope of the “Acute immunization for unconventional indications” report. The company also develops check-point inhibitors (indoleamine 2,3-dioxygenase pathway inhibitors) for cancer indications  and vaccines for infectious diseases (influenza and Ebola). The company has adopted an interesting strategy to combine their proprietary check-point inhibitors with other “activators” of immune system (e.g. PD-1 inhibitors) and with chemotherapy.

After the OBI-822/821 vaccine in February 2016 did not meet the primary endpoint in the Phase II in breast cancer (however patients who demonstrated an immune response (IgG or IgM) showed highly significant improvement in progression-free survival; OBI Pharma is continuing towards a Phase III based on results of this subset population) and the Celldex´ Rintega vaccine in March 2016 failed to improve overall survival of glioblastoma patients in comparison to the control arm in the Phase III, Algenpantucel-L is another vaccine therapy this year which did not meet primary endpoints despite very promising results in previous clinical phases.

If you are interested to see target product profiles of other more than 100 antibody-inducing vaccines in active development for unconventional indications, if you want to get information about dozens of stopped vaccine projects and if you want to know which results can be awaited in 2016, have a look in the report “Active immunization for unconventional indications”. The report can also be obtained via the Research and Markets. 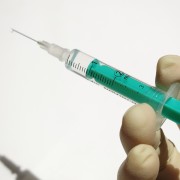 “Prostate cancer patients and their doctors may want to think twice about the best timing for chemotherapy or radiation therapy in conjunction with a common nonsurgical treatment, based on international research findings led by UT Southwestern Medical Center investigators.”

Scientists found out that usual medical androgen deprivation therapies (ADTs) like chemotherapy or radiotherapy deprive also patient´s adaptive immune system and any subsequent immunotherapy will be then compromised. The surgical ADT- castration- works in combination with immunotherapy.

Reduction of T-cell response against the prostate cancer induced by some androgen receptor antagonists was found by researchers as a main mechanism of this effect.

As a take-home message from this scientific work is that physicians will have to carefully think about possible combination strategies in advance before starting radiotherapy or chemotherapy for prostate cancer. And if immunotherapy is an option, one should consider timing and method of the ADT to be used.