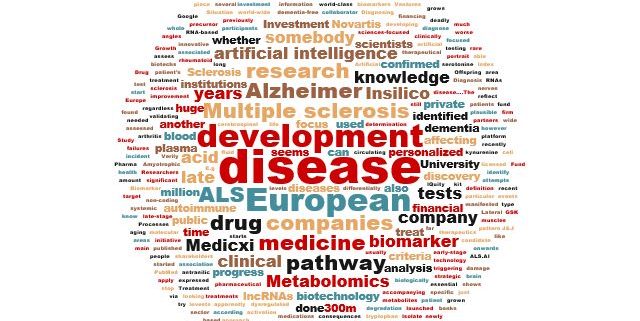 What has caught my attention in Pharma, Biotech, Biomedicine and Science in the last weeks? Here is a selection of the news, articles, papers, findings, risings, falls as I have read, heard, discussed, been involved in. Very subjective, not pretending to be comprehensive or representative. Just my selection.
My MedScan in the past weeks.

It seems that my regular blog became irregular:-) Nevertheless, I am continuing exploring the biomedicine world and I will bring from time to time some interesting news and opinions.

Processes which lead to development of Alzheimer´s disease (AD) start according to some scientists already 20 years before the disease is clinically manifested. Treatment at time of confirmed AD seems to come too late to reverse damage already done and to stop further disease progress. We still do not know why somebody gets AD and somebody not. Drug development failures over the recent years in very late clinical stages can reflect the fact that we try to treat too late and/or we are focusing on consequences and not on triggering events. Biomarker research in AD is a drug development accompanying process and it seems that scientists have another piece to the whole puzzle.

Researchers from the Boston University School of Medicine assessed 217 circulating metabolites in more than 2000 dementia-free participants of the Framingham Offspring Cohort Study over many years. They identified four biologically plausible candidate plasma biomarkers for dementia. A significant association between higher plasma antranilic acid levels and increased risk of incident dementia was found. This acid is a part of the kynurenine pathway which is the main pathway for degradation of an essential amino acid tryptophan (precursor of serotonine). All in all, this analysis shows an importance of looking at more wide angles as we have done until now in AD.

Medicxi, a life sciences-focused investment firm, grown from the the Index Ventures and started operations in 2016, has got a huge financial injection, $300m from Google (via its Verily), Novartis and the European Investment Fund (shareholders of the EIF are the European Investment Bank, European Commission and public and private financial institutions and banks). Their Medicxi Growth 1 fund will help European biotechnology companies and institutions to develop therapeutical products from Phase II and further. This initiative is apparently focused on improvement of an access to financing of European health biotechnology sector, regardless of whether private or public. Situation in Europe is much worse than the situation in US in this area.

Medicxi also invests into early-stage companies and even starts and grows companies out of labs, academia or Pharma. Along with Novartis, another two world-class pharmaceutical companies, GSK and J&J, are also strategic partners of the company.

Multiple sclerosis (MS) is an autoimmune disease, affecting more than 2,5 million people world-wide. Diagnosis of MS is usually confirmed after brain MRI, cerebrospinal fluid testing and several clinical criteria. There are however attempts to diagnose MS and other autoimmune diseases from blood.

IQuity is developing an RNA-based tests which are based on their technology licensed from the Vanderbilt University. The tests focus on determination of the molecular portrait of long non-coding RNAs (lncRNAs). As the company previously showed, one lncRNA was differentially expressed in rheumatoid arthritis patients and it responded to therapy. lncRNAs expression pattern is very specific for a particular type of a cell.

By using the Isolate MS kit, one can determine so far whether somebody has the disease or not. Further development and definition of clinical criteria are needed to be able to assess the progress of the disease by such tests.

Artificial intelligence for drug discovery and personalized research for ALS

I have observed the US company Insilico Medicine already for some time. They use artificial intelligence and deep learning for mining of knowledge about aging and other areas and apply this knowledge for biomarker research and drug development.

I like such systemic approach which does not focus just on one pathway or one target but take in account all available information about a disease published. E.g, with more than 27 million papers in PubMed, huge amount of knowledge is already out there.

Insilico Medicine has recently launched ALS.AI, a personalized drug discovery and biomarker platform for Amyotrophic Lateral Sclerosis, a deadly rare disease affecting nerves and muscles. “Insilico Medicine used its pathway activation analysis algorithms to identify the dysregulated pathways that were associated with the patient’s ALS disease….The collaborator is validating the newly identified treatments before they may be used to treat the patient (some of the medications were approved by FDA for the treatment of other diseases)”.

Why I like this nonmedical “therapy” for dementia?
Scroll to top